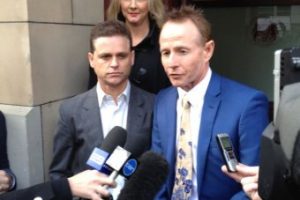 Pat Lennon (Right) and Danny Nikolic outside of VCAT

Danny maintains that he suffered a substantial penalty arising out of his altercation with the Chief Steward, Terry Bailey, and he has served more than his time by virtue of that incident and the subsequent findings.

Danny has maintained and continues to maintain that he is a fit a proper person and ought to be re-licensed to ride as a jockey. It is significant that the jockeys have all given their support for Danny to resume riding and to pursue a career that he has been engaged in for over 25 years.

Danny continues to resist the allegations and basis upon which it is asserted that he is not a fit and proper person to be granted a jockey’s licence.

Danny is also disappointed about the impact of ongoing negative publicity and media coverage which has tarnished his reputation and clearly contributed to Racing Victoria resisting his attempts to be re-licensed.

Subject to carefully considering the decision handed down today and obviously ascertaining that reasonable grounds for an appeal exist, Danny proposes appealing the decision.

Danny has only ever wanted a fair go and to be treated in the same manner that others would be treated. He only seeks that Terry Bailey and/or Racing Victoria treat him objectively and with the impartiality that they ought treat any person seeking to make a living and pursue the only career they have ever known.